Our goal here is to bring you interesting facts and stories about Sumax for the past 35 years.

Back in the early 1980’s the way we would put color on to metal was by anodizing. It had its limitations. You could only use aluminum billet. Casting was out due to the molecular structure. Furthermore, motor heat and sunlight would fade the colors. Powdercoating was just beginning to be used as an environmentally friendly industrial finish. It was durable but had a rough orange peel finish. In 1987 we purchased a new powder gun and began experimenting. As a result, Sumax would be the first company to specialize in powder coating motorcycle rims and motor parts. Powder coating sheet metal would follow. 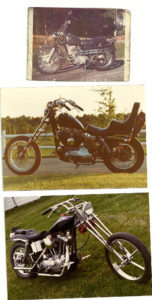 Kirk’s Honda 305 Scrambler received a pair of small Ape hangers, cut off muffler replaced by “snuff or nots” along with a new paint job. Next is a 1975 Harley Sportster with an extended front end & king queen seat. This was radically changed with a Corbin Gentry frame, gas tank, Girder front end, Mag wheels and custom paint.

In the year 1983 Kirk and Taylor Cable’s relationship began. Sumax would Design, Develop, Market, and Master Distribute World Wide Spark Plug Wires and Battery Cables for the Motorcycle Aftermarket. They became the BEST Spark Plug Wires for Harleys. At the drag strip our new 8mm spark plug wires for Sportsters blew away the competition. Kirk’s many Racer Friends tried and WON with the new Spark Plug Wires. Most plug wires back then came in black, yellow, or orange. The new red and blue colors with matching boots and wires were a hit.

A few years later Kirk decided that many of the Harley models needed to run saddle bags. He had it with stuffing the 6 pack of beer under his shirt. The Softail models, being the most popular at that time, were the first to receive our Saddle Bag Brackets. These would allow you to run 1993 & newer hard Harley Davidson and Custom Hard Saddle Bags.

This was followed up with the need to line the stock Harley Bags and their Custom Hard Saddle Bags. A rich charcoal grey liner used in the custom car market for trunk liners would be used. No more need to wrap your belongings in towels to eliminate the rattle known with loose parts with our Saddle Bag Lining Kits.